Research carried out in Manuel Théry’s laboratory on the way cells adapt to their environment has led us to imagine a video and sound installation, linking this scientific research to an artistic approach.

Passing from micro to macro by a factor of over one million, Living Architectures thus provides a vision of the driving forces that animate cells, the state of balance that is constantly sought, the mechanical laws permanently underlying them and through which they are able to multiply, mitosis after mitosis.

How can we render the vertiginous nature of such research, making visible the almost unbelievable dimension of such a vision – the development of living cells and their constant adaptation to their environment? 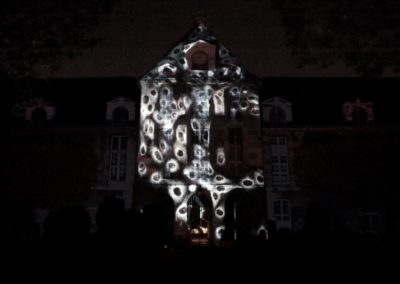 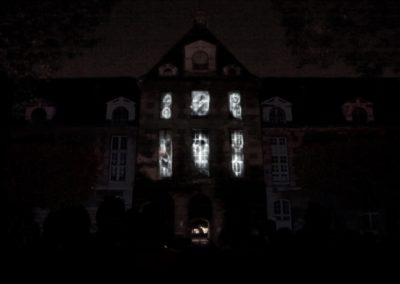 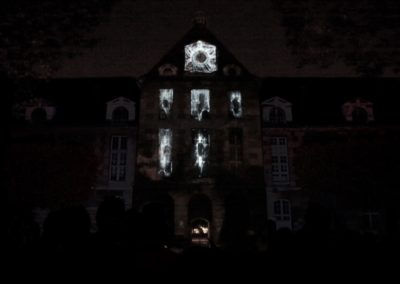 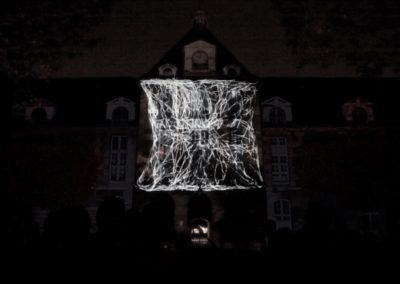 Making Of produced for the Paris Nuit Blanche 2013

The film material is the result of scientific research methods, which, to investigate the reproducibility and the spatial organization of cells, use geometric shapes engraved on a pattern to study their evolution.

The principle is to draw a pattern with a short-pulse laser on a glass slide that can accommodate 1, 10 or 100 cellsLive human cells are then placed on each engraved slide.these cells can then only attach themselves to the elements that have been drawn by laser.they are therefore forced to adapt their form to the shape of the drawing.the patterns are coated with fluorescent adherence proteins on to which the cells can attach themselves, thanks to the cables that constitute their skeleton.The cells are then visualised and filmed through a microscope equipped with sensitive cameras. their internal skeleton is dynamic and in a perpetual reconfiguration. The cables change their size and place according to the points on which the cells adhere.Certain films lasting a few minutes are reprojected onto the façade of the building with at their original speed; others, filmed over periods of dozens of hours, are accelerate.